Iligan City had its beginnings in the village of Bayug, four (4) kilometers north of the present Poblacion. It was the earliest pre-Spanish settlement of native sea dwellers. The monotony of indigenous life in the territory was broken when in the later part of the 16th century, the inhabitants were subdued by the Visayan migrants from the island kingdom of Panglao.

In the accounts of Jesuit historian Francisco Combes, the Mollucan King of Ternate invaded Panglao. This caused Panglaons to flee in large numbers to Dapitan, Zamboanga del Norte.

In Dapitan, the surviving Prince of Panglao Pagbuaya, received Legazpi’s expedition in 1565. Later, Pagbuaya’s son Manook was baptized Pedro Manuel Manook. Sometime after the conquest of Camarines by the Spaniards in 1573, the Christianized Manook subdued the Higaunon village in Bayug the same year and established it as one of the earliest Christian settlements in the country. The settlement survived other raids from other enemies, and, because of their faith in God and in their patron saint, Saint Michael the Archangel, the early Iliganons moved their settlement from Bayug to Iligan, which the Augustinian Recollects founded as a mission in 1609.[5]

The Jesuits replaced the Recollects in 1639. Iligan was the Spaniards’ base of operations in attempting to conquer and Christianize the Lanao area throughout its history. A stone fort called Fort St. Francis Xavier was built in 1642 where Iliganons sought refuge during raids by bandits. But again, the fort sank due to floods. Another fort was built and this was named Fort Victoria or Cota de Iligan.

In 1850, because of floods, Don Remigio Cabili, then Iligan’s governadorcillo, built another fort and moved the poblacion of the old Iligan located at the mouth of Tubod River west of the old market to its present site.

Iligan was already a town of the once undivided Misamis Province in 1832. However, it did not have an independent religious administration because it was part of Cagayan de Oro, the provincial capital. It was one of the biggest municipalities of Misamis Province.

The Spaniards abandoned Iligan in 1899, paving the way for the landing of the American forces in 1900.

In 1914, under the restructuring of Moroland after the end of the Moro Province (1903–1913), Iligan became a municipality composed of eight barrios together with the municipal district of Mandulog. After enjoying peace and prosperity for about 40 years, Iligan was invaded by Japanese forces in 1942.

The liberation in Iligan by the Philippine Commonwealth forces attacked by the Japanese held sway in the city until 1944 to 1945 when the war ended. On November 15, 1944, the city held a Commonwealth Day parade to celebrate the end of Japanese atrocities and occupation.[7]

Using the same territorial definition as a municipality, Iligan became a chartered city of Lanao del Norte on June 16, 1950. It was declared a first class city in 1969 and was reclassified as First Class City “A” on July 1, 1977 by virtue of Presidential Decree No. 465. In 1983, Iligan was again reclassified as a highly urbanized city.

Republic Act No. 9724, an Act separating the City of Iligan from the First Legislative District of the Province of Lanao del Norte was approved by President Gloria Macapagal Arroyo on October 20, 2009.

To the west, Iligan Bay provides ferry and container ship transportation. East of the city, flat cultivated coastal land gives way to steep volcanic hills and mountains providing the waterfalls and cold springs for which the area is well known.

Cebuano is the major language in the city (about 93%). The rest speak Tagalog, Maranao, Hiligaynon, Ilocano, Chavacano, and Waray-Waray. The majority of the population can speak and understand English.

Saint Michael is widely regarded as the Patron saint of the city. The city fiesta in devotion to the saint, called the Diyandi Festival, is held every September 29. He is locally known by the Spanish version of his name, Señor San Miguel. Devotion to him is common to Muslims and Christians in Iligan. 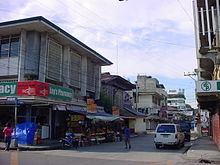 Iligan is known as the Industrial Center of the South and its economy is largely based on heavy industries. It produces hydroelectric power for the Mindanao region through the National Power Corporation (NAPOCOR), the site of the Mindanao Regional Center (MRC) housing Agus IV, VI and VII hydroelectric plants. It also houses industries like steel, tinplate, cement and flour mills.

After the construction of Maria Cristina (Agus VI) Hydroelectric Plant by National Power Corporation (NPC, NAPOCOR) in 1950, the city experienced rapid industrialization and continued until the late 1980s. The largest steel plant in the country, National Steel Corporation (NSC), was also established in 1962.[11]

During the 1997 Asian Financial Crisis, the city experienced severe economic slowdown. A number of industrial plants were closed, notably the National Steel Corporation.[12]

Iligan along with its neighboring city, Cagayan de Oro City, are the two major components for the Cagayan de Oro-Iligan Corridor, the fastest developing area in NorthernMindanao. 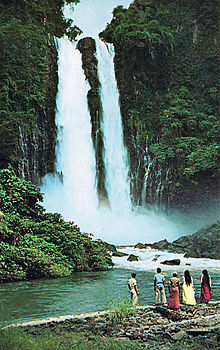 Iligan is known as the City of Majestic Waterfalls because of the numerous waterfalls located within its area. There are about 24 waterfalls in the city. The most famous as well as the city’s major landmark, is the Maria Cristina Falls. It is also the primary source of electric power of the city, harnessed by Agus VI Hydroelectric Plant.

Waterfall hopping is now becoming one of the popular activities for eco-tourists in Iligan City.

Iligan is one of the few cities in the Philippines and the only city in Mindanao where one can find a tartanilla, a horse-drawn carriage, plying the main streets from Badelles Street in Pala-o to Barangay Tambacan.

Kasadya Merrymaking and Street Dancing is Iligan City’s month-long cultural celebration held every month of September and concludes on the feast day of Saint Michael on September 29. The highlight of the event is Kasadya Street Dancing, a ritual dance offered to the patron saint as thanksgiving.

The Kasadya Merry Making and Street Dancing has been renamed Sayaw Saulog in 2014. 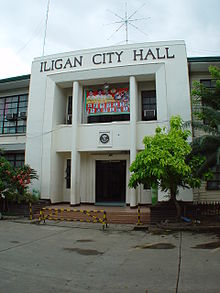 Iligan City is a highly urbanized city and is politically independent from the Province of Lanao del Norte. Registered voters of the city no longer vote for provincial candidates such as the Governor and Vice Governor unlike its nearby towns that make up the provinces as a result of its charter as a city in the 1950s.

Iligan City’s seat of government, the city hall, is located at Buhanginan Hills in Barangay Pala-o. The local government structure is composed of one mayor, one vice-mayor and twelve councilors. Each official is elected publicly to a 3-year term and can be re-elected up to 3 terms in succession. The day-to-day administration of the city is handled by the city administrator.

The Port of Iligan is located along the northern central coastal area of Mindanao facing the Iligan Bay with geographical coordinates of approximately 8°13′56″N 124°13′54″E. It is 795 kilometres (494 mi) south-west of Metro Manila.[15]

It serves the port users and passengers coming from the hinterlands of the provinces of Lanao del Norte, Lanao del Sur, parts of Misamis Oriental, and the Cities of Iligan and Marawi.[15]

There are around seven private seaports in Iligan operated by their respective heavy industry companies. These private seaports can be found in Barangays Maria Cristina, Suarez, Tomas L. Cabili, Sta. Filomena, and Kiwalan.

The main airport is Laguindingan Airport (IATA: CGY; ICAO: RPMY), located in the municipality of Laguindingan, Misamis Oriental, which opened on June 15, 2013,[16] the airport replaced Lumbia Airport as the main airport of Misamis Oriental and Northern Mindanao.[17] It has daily commercial flights to and from Manila, Cebu, Davao and Zamboanga via PAL Express, and Cebu Pacific.

Maria Cristina Airport (IATA: IGN; ICAO: RPMI), is located in Balo-i, Lanao del Norte, and was the main airport of Iligan in the late 1980s.Aerolift Philippines, a now-defunct regional airline, ceased its services when its passenger plane crashed into some structures at the end of the runway of the Manila Domestic Airport in 1990 which resulted to its bankruptcy.[18][19] Thus, it ended its service to Iligan’s airport at Balo-i which also resulted in the closure of the airport. Philippine Airlines served the city for many years before ending flights in 1998 due to the Asian financial crisis.

There are two main bus terminals in Iligan.

The public modes of transportation within the city are Jeepneys, Taxis, and Pedicabs. “Tartanillas” service main roads in Barangay Pala-o and Barangay Tambacan.

The City of Iligan has one state university and seven private colleges specialized in Engineering and Information Technology, Health Services, Maritime Science, Business and Administration, Primary and Secondary Education, and Arts and Social Sciences.

With a total of 181 schools (106 public; 75 private; 17 madaris) including vocational and technical schools, Iligan City has an average literacy rate of 94.71, one of the highest in the whole Philippines.

The city has three local television channels. They are ABS-CBN, GMA Network and ABS-CBN Sports+Action. The city also has eight FM and one AM radio station.

This is a text widget. The Text Widget allows you to add text or HTML to your sidebar. You can use a text widget to display text, links, images, HTML, or a combination of these. Edit them in the Widget section of the Customizer.
%d bloggers like this: